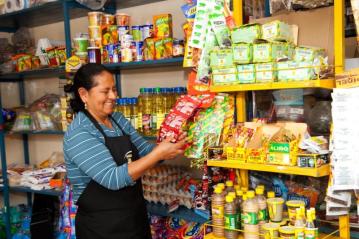 According to a balance made by the National Federation of Merchants (Fenalco) among the events that most marked the course of business in the country in 2020, it was the return to the neighborhood.

According to the union, attention in purchases was focused on the so-called traditional channel and neighborhood stores. More than 45 % of Colombians bought the basic products of the family basket in these businesses.

In their turn the hard discount or discount stores made more opportunities visible, since it was estimated that there should be a store of this type less than 15 minutes from a residential area.

In a union discussion on "economic perspectives" it was indicated that the favorable trends for neighborhood and discount stores propitiate better opportunities for small and medium-sized enterprises (SMEs) to become providers of this type of business.

On the other hand, it was indicated that the so-called department stores incorporated new categories and increased the sales of some that were relegated, such as kitchen items. In addition, the pandemic caused a wallop in wardrobes and sales of casual clothing and pajamas increased considerably, Fenalco said.

The previous year, cash was the most relevant means of payment and, additionally, there was a refurbishment of the home, because the purchase of items to meet the needs that arise inside the homes was increased. In addition, the sale of pet products skyrocketed, according to the association's observations.

November was the most positive month for the economy in 2020, leaving the holiday season in the background. "The real estate, financial and primary activities sectors such as agriculture, helped make the shock less strong and did not suffer as drastic effects as those of other activities," it was indicated.

Among the projections for next year, Fenalco expects economic growth to be between 4.5 % and 5.5 %, and warns that there will be a legislative marathon, since by June 2021 there are an estimated 24 bills proposed by the Government . Among them: